Building The Dark Tide of the Endless Sea

Building The Dark Tide of the Endless Sea


I completed my Trident Realms army for Clash of Kings Australia (CanCon) in Canberra. This was the most ambitious and succcessful thing I've ever done hey.


I blogged about my ideas for a new Trident Realms army back in July. I meant to post more regular updates about how things were going, but mostly I stuck to instagram and a photo album on Facebook.

I learned a lot of techniques in making this army. Edge highlighting, pinning, zenithal shading. Magnetising. Working with large metal miniatures (the worst) and extruded foam (the best). Green stuffing gaps. Airbrushing. Gosh wasn’t that a learning curve. I feel like I’m a more rounded hobbyist now. Once I learn to do some sculpting and scratchbuilding I reckon I’ll be pretty good hey. 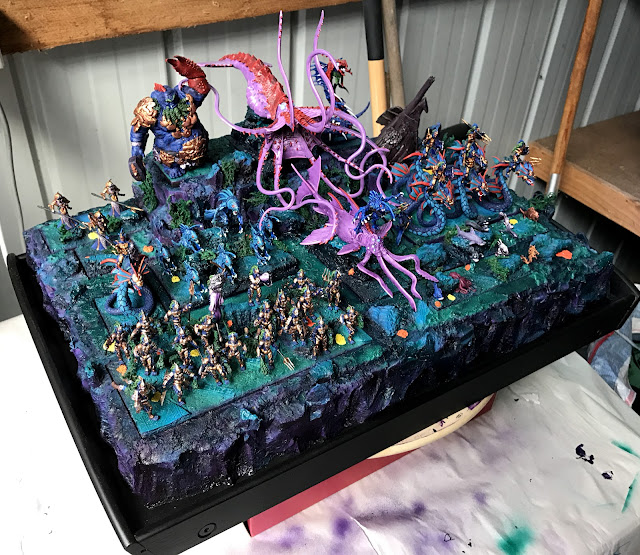 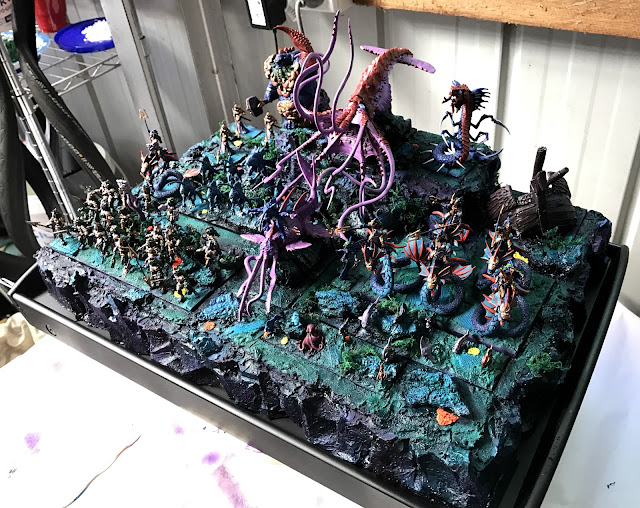 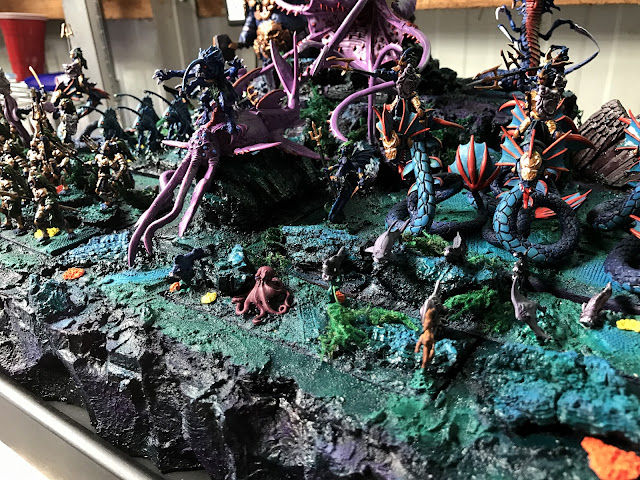 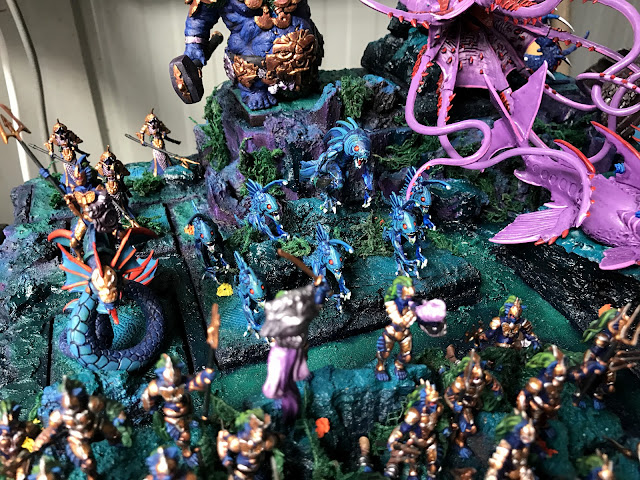 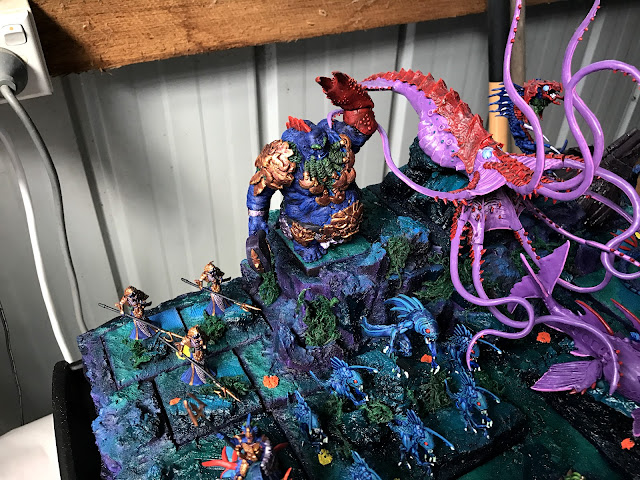 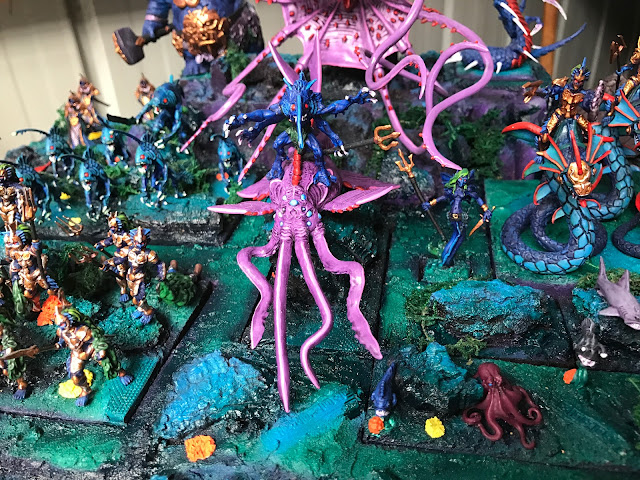 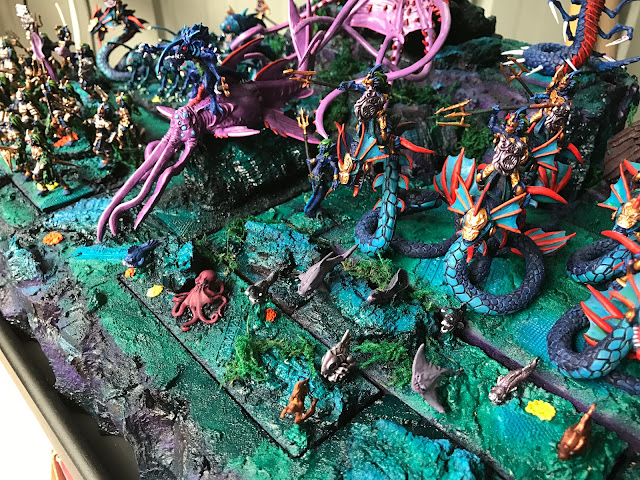 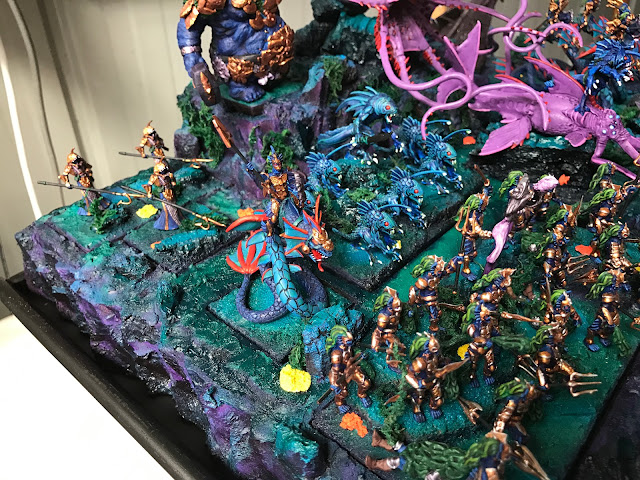 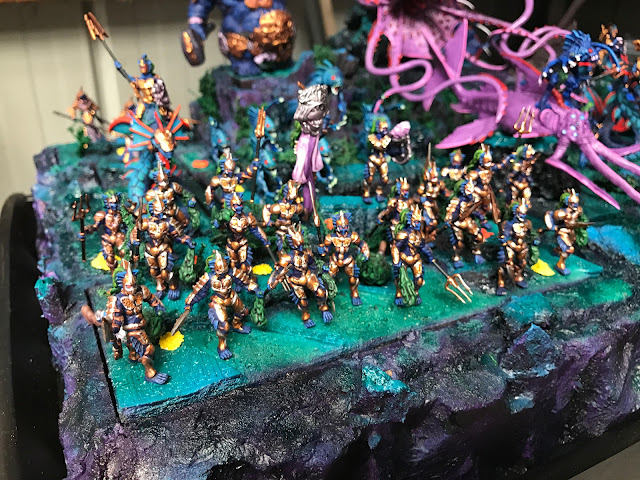 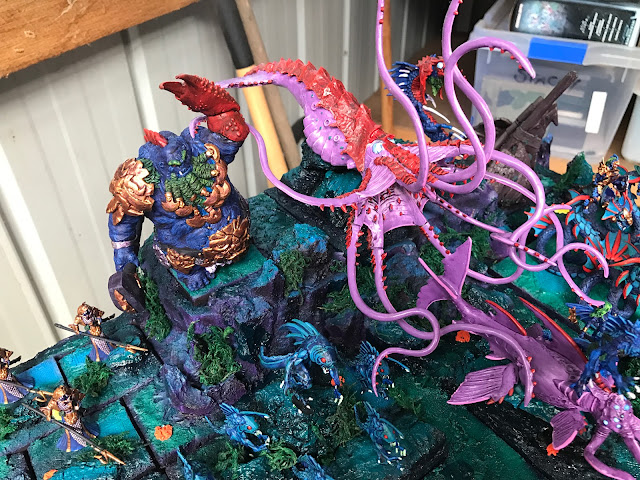 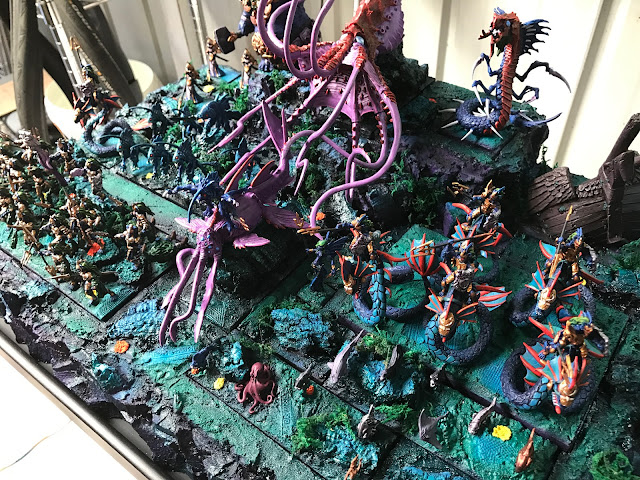 
After a couple of months of list testing with MDF base templates and sticky notes, I started work on the first unit in October. Naiad Ensnarers Horde. While I was still trying to settle the rest of my list, I knew I would be running Ensnarers, so it made sense to start there. I tried Placoderms, but I found their slow speed and lack of pathfinder made them an awkward fit with the rest of the army.

The final colour palette was a bit of an accident. I knew the basic colours that I wanted, something like the sea floor of the atlantic. I didn’t want to paint my bases & display board with regular model acrylics just because I thought it would cost too much, so I went into a art supply shop and they happened to have a deal on high-flow acrylics, 3 big bottles for $30, and I just grabbed the 3 most aquatic looking ones. It wasn’t until I got home and tested them that I realised the colours were quite different to the labels. The purple in particular came out a lot darker than I expected, which ended up being very useful. I was able to use dark purple as my ‘shadow’ colour all over the project, using Druchii Violet wash from GW for the models and this purple for the terrain.

I am not a good painter. I’m not trying to fish for compliments or anything, just stating a fact. My brushwork is terrible. I can’t blend to save my life, my edge highlighting is clumsy, and I can’t sculpt anything beyond lumpy snakes. I have been seriously painting for less than 12 months (at the time of writing). I know that my stuff looks cool, but I’m not a good painter.

What I am good at is visualising a finished project, methodically planning out the steps, and following it through to completion. I formulated a strong vision of what I wanted to make, I set out a project plan to keep things moving in a timely way, and I did it. I understood that basically no one would ever be viewing my models right up close, almost always from a distance of a couple of feet at least. So that’s what I painted to. Gosh it sounds boring when I put it like that. But whatever. I do not let perfect be the enemy of good. I’ve made two fully painted forces with display boards in the last 12 months using this method.


I settled on a final list in early december. I had to balance three things.

So after about 3 months of testing, this is what I came up with: 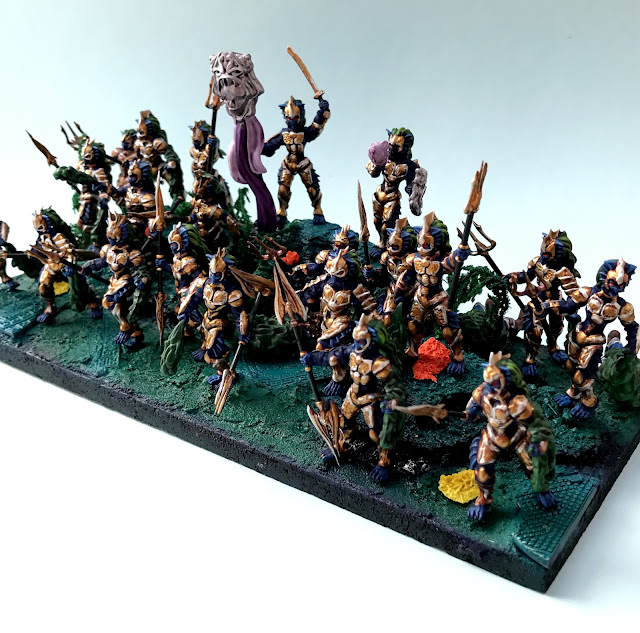 Horde Naiad Ensnarers with Crystal Pendant. - These guys are the main anvil for my army, and are the centrepiece of my deployment. With pathfinder and ensnare, I typically try to set them up to sit in a forest or difficult terrain. The Crystal Pendant and Regen causes all sorts of problems for my opponents. With 4+ regen they are a frustrating target to shoot at because they heal back so many wounds. You have to hit them with a *ton* of shooting to down them in a single round. But with the crystal pendant they are annoying to charge. There really is no ‘easy’ way to deal with them. 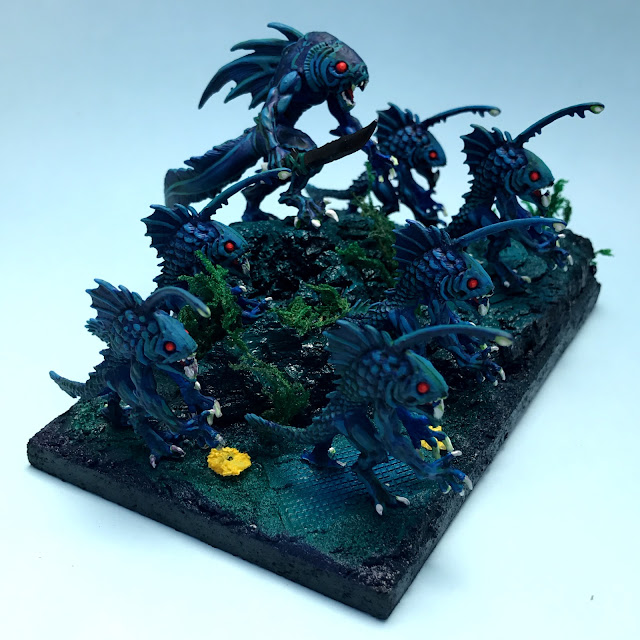 Horde Depth Horrors. I resisted running those unit for far too long, put off by the very low defence and lack of regen. But for the price they are great. They hit as hard as any other large infantry horde and for like 50 points cheaper. I’d love for them to have pathfinder, but usually I screen them with the Ensnarers, and they take the role of mopping up whatever melee units remain after the Ensnarers die. 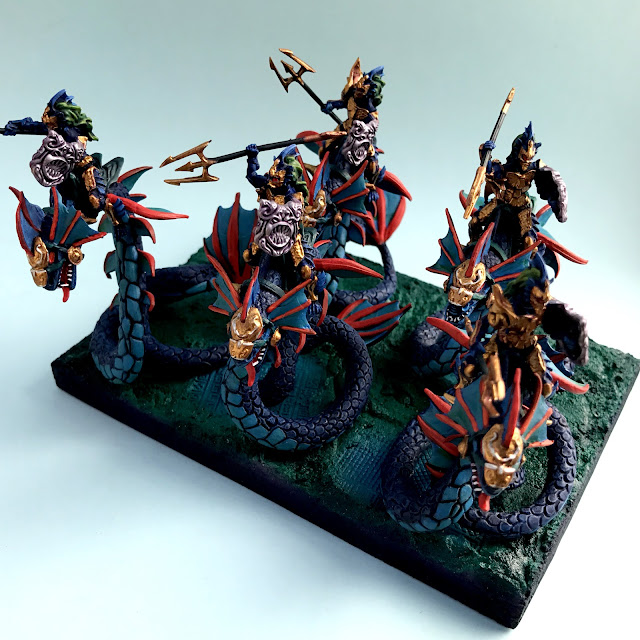 Horde Naiad Wyrmriders. This is a frustrating unit. They are a vital mobile hammer for my force, but their defence and nerve is just so low. They can take a charge from a single unit about half the time. A multicharge will definitely finish them off. They need support from chaff, and they need to be inspired all the time. They will be greatly improved by the new magic items in the Organised Play 2017 book, but as they are they are very much a finesse unit. If I was going for pure effectiveness I would drop these for another horde of depth horrors. But I’m glad to run them, the mantic models look awesome (if impractically heavy). Seriously my horde weighs over 780 grams. 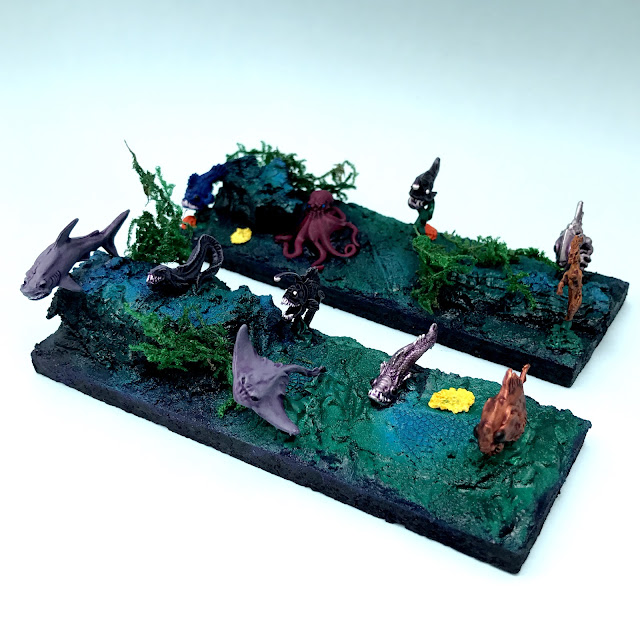 Two Regiments Tidal Swarm. Pretty much the best chaff in the game along with Gargoyles. 75 points, fearless, Nimble, height 0. Get them into difficult terrain or behind an obstacle and they can hang around for a frustratingly long time with their ensnare. With the new Organised Play 2017 book I’m likely to drop these for Nokken, but right now they are great. 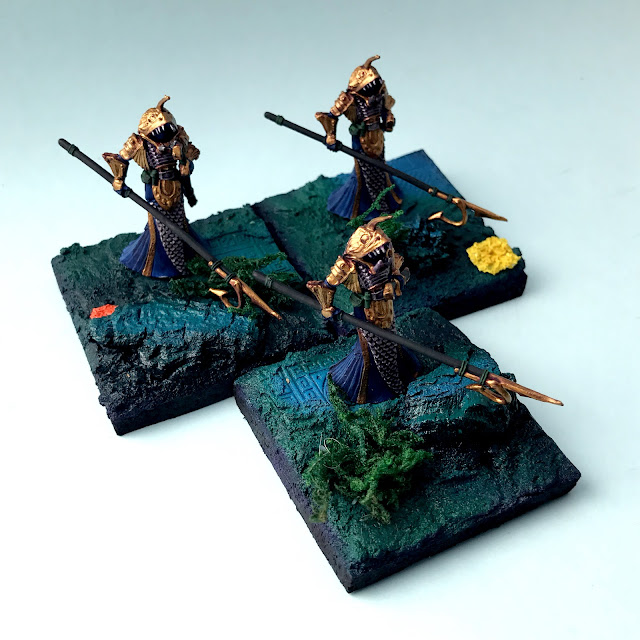 3 Sea Priests (counting as Leviathan’s Banes). A battery of war machines that sit in a forest and ruin people’s days. They reliably pump out about 7 wounds a turn, and more than once they have taken out large units like drakon hordes or earth elementals in a single volley. I tried running without shooting, but it really is necessary to pressure the opponent to bring them closer to me. I’m not fast enough to force engagement on my terms. If I can I use them specifically to counter high def units that my melee units struggle against, or to counter fire on warmachines. Especially the very pesky flamebelchers or dragon’s breaths that really melt my infantry. Otherwise I park them somewhere they can command good firing lanes and just poke away for the whole game. And they are surprisingly resilient against your classic war machine hunting individuals with ~ 6 attacks. 18 attacks hitting on 5s ends up being only like 3-5 wounds. 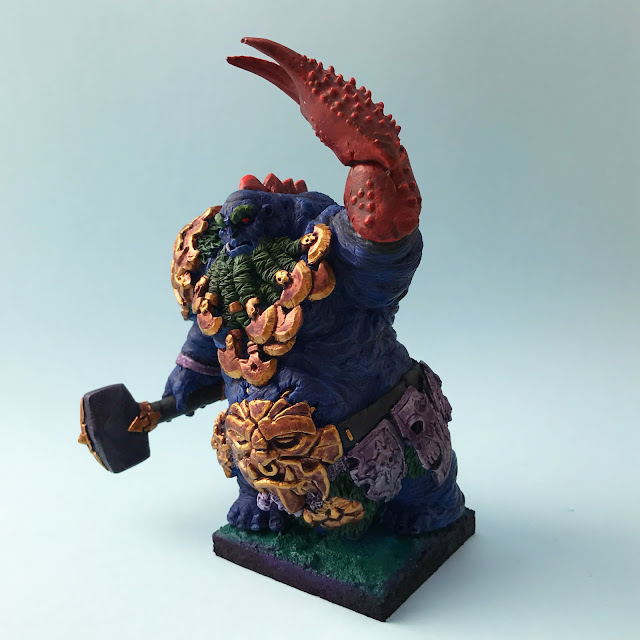 Coral Giant. A mobile anvil. More survivable than a regular giant, but also less dangerous. He can hold up most units for at least a turn, but he needs support because most of the time he’s doing like 3-4 wounds max. But sit him behind an obstacle and let your opponent discover the joy of a hindered ensnared charge against a unit with iron resolve, Def 5 and 18 nerve. I would have liked to run the Kraken in this role, but the Giant is 30 points cheaper and basically just as good in 80% of situations, and considerably better in some others, so Mr Crabby Claw won the starter’s jersey. 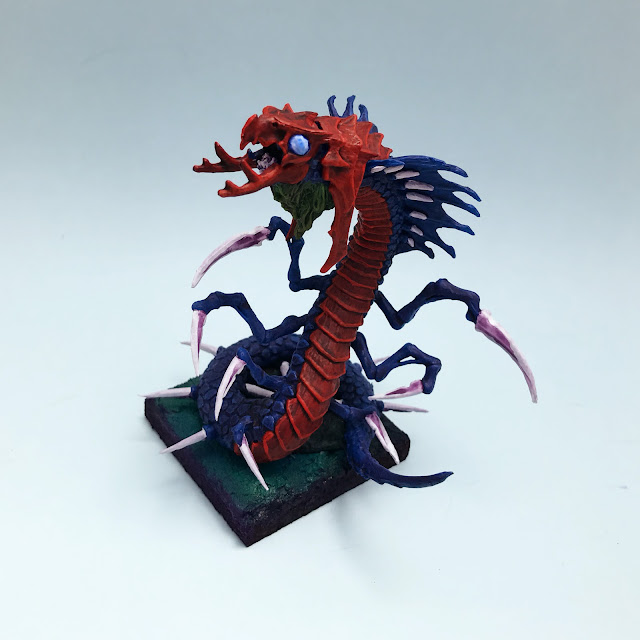 Knucker. Another unit I resisted playing for way too long, this thing is so great. I was put off by the 6 attacks hitting on 4s. But what you do with this guy is spend the first 2-3 turns looping around the back of the enemy force, maybe cleaning up a warmachine along the way. Nimble, pathfinder, speed 9, height 4 means it’s almost impossible to hide from him. And then you spend the last 3-4 turns of the game deleting units each turn with rear charges, or tapping things that have a bunch of wounds on them already. Just make sure you keep him safe early on. With low defence and height 4 he is very susceptible to shooting. 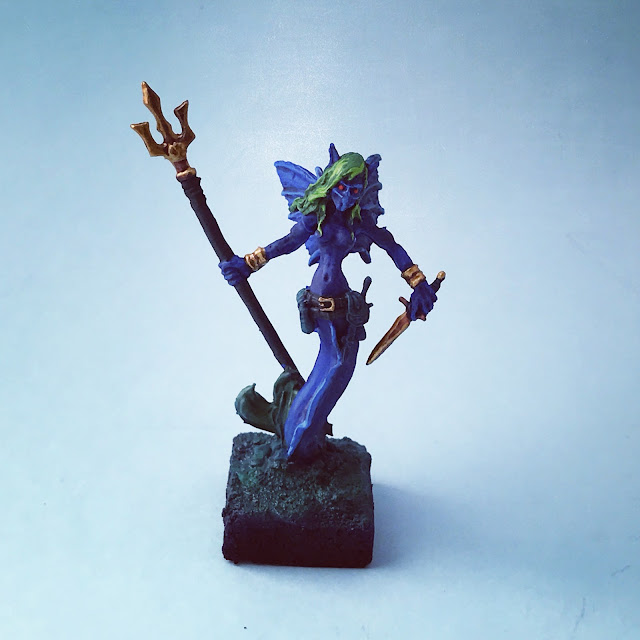 The Siren. An iconic unit for this faction, she’s so much fun. Mostly because my opponents usually have never played against her. Her party trick is her spell, Siren’s Call. She can draw enemy units towards her and disorder them (preventing them from shooting or flying the next turn). She really helps me deal with shooters and flyers, which are my big weaknesses. Trouble is she can only deal with one thing at a time, and towards the end of the game she does run out of targets as everything gets caught in combat. I keep her near the Trident King, so later on she can drag stuff within range of the King’s breath weapon. 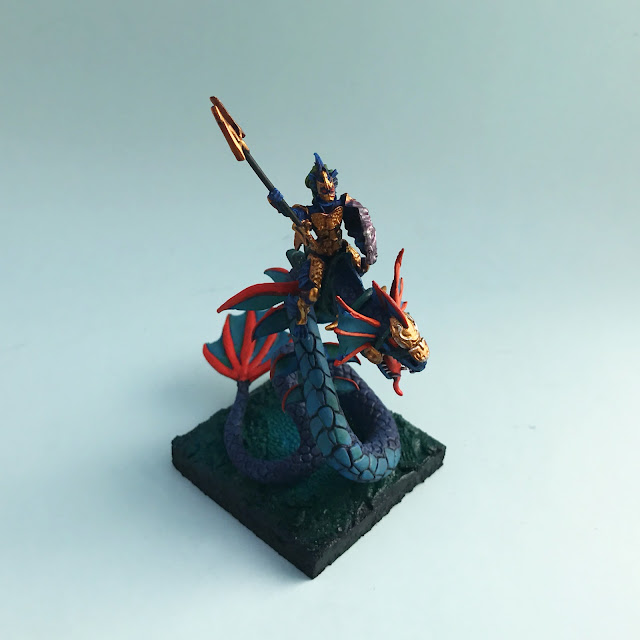 Wyrmrider Centurion with Mace of Crushing. I love putting the Def 6 item on this unit, but I was short on points. I use him to support the other Wyrmriders on a flank. Keep him alive and he’s great in the later turns, as he will be fighting very heavily wounded units with only a point or two of damage himself. 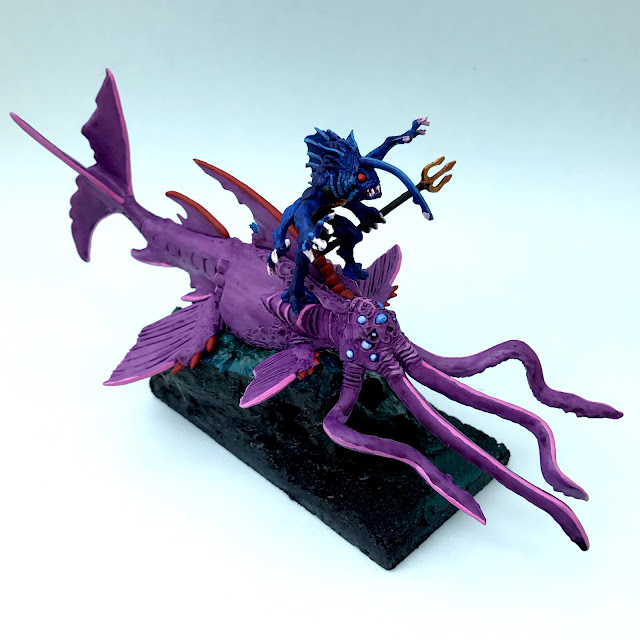 The Trident King. A handy Swiss-Army knife. Very Inspiring is great, his breath weapon is great, and his speed and melee capability can really catch an opponent off guard. I’d love to give him regen or more defence, but he’s a living legend. He will most likely get dropped for a Thuul Mythician once the changes to breath attacks land. But for now he’s a cool dude.


How I made my bases


These bases were very much an experiment but gosh I fell in love with them straight away. I've not seen anyone else do bases quite like this, and I love that.


How I made the display board


The display board was always a key part of this project, but it also had to be the last thing completed. All up it took about 4 days. 1 day to cut the foam up, chip and shape it to look like rocks and cut up the cork tile to make the recesses. 1 day to glue everything together. This was the most tedious step, constantly having to check that all the unit bases slotted in easily. 1 day to apply the pollyfiller and tiling grout texture. And finally a day or two to paint it all.


Thanks for reading, I hope you got something out of it. Not entirely sure what is next. Most likely some deadzone stuff. But I do want to take a bit of a break from the hobby side of things. Cheers.

The Army of Prinz Johannes of Westhaven.

The Army of Prinz Johannes of Westhaven